Welcome to The Whirlybird Compound! We’re thrilled to have overcome the challenges of recent years and to once again be hosting unique cultural and artistic events and activities. Some of our recent events include our traditional Pre-Blackpot Camp Throwdown, hosting a film crew for an exciting Cajun French/English feature film called Pointe Noire, written by our friends Pat Mire and Rebecca Hudsmith (Pat directed) and co-creating and hosting the Blown Away on The Bayou Blues and Harmonica Summit with Grant Dermody.

In the coming weeks, we’ll be hosting Jim’s Art Shows at The Tower Gallery, where you can view Jim’s watercolor and charcoal portraiture, his Mandala Photography and his Folk Art Prints.  We will be curating a new show,  collaborating with other local artists, and starting an online art gallery to reflect Jim’s  work in The Tower Gallery.  Come by to see our “folk art-chitecture” structures and check out some of Jim’s Folk Art Prints and his Mandala Photography – his “Profane to Sacred” project. If you’re interested in visiting The Tower Gallery, please email Jim at thewhirlybird@gmail.com to make an appointment and for secret directions and parking instructions.

We have a rich history at The Whirlybird Compound, and if you have time, you can read all about it and see many videos of activities on our website, thewhirlybird.com and thetowergallery.org.

We believe in the power of family and friendships, and the idea for the Fan Club came from friends, first, as a way to help us clear the debt we owed to our friend for returning the building to us and then as a continuing effort to support the artists who collaborate with us to create all the cool events. We’re grateful for the support of our community and look forward to continuing to bring cultural and artistic experiences to The Whirlybird Compound.

We fell in love with the culture of Acadiana and bought an old “camp” – a weekend place with a cabin – just outside Opelousas. When our friends asked what we were going to do with the place, they laughed when we said, “We’re gonna put a dancehall in the yard.” But that’s exactly what we did.

A local friend found an old tin-sided rail-yard freight depot that we could afford to purchase and move to our camp. With the help of many friends, we created a “cultural house of fun” bigger than anything we ever imagined or planned, while traveling back and forth between California and Louisiana, bringing loads of folk art with us.

In late August 2005, the night before Hurricane Katrina hit the coastline, we had a party, having finally finished major construction and having most of our early renovations done. Our Irish friend, Tony Davoren, described it as a “bar wetting” party, but most everyone left early to prepare for the hurricane. Since Katrina, using mostly recycled materials, we installed a dance floor and a bandstand, a small kitchen and an ornate, salvaged wood bar. We added 2 bathrooms with hot showers along with two “very cool” private bedrooms we call the Kingdom of Zydeco and the Esquire Ballroom. We occasionally rent the bedrooms through online travel clubs as vacation rentals to help us pay for the building and utilities, but we want to keep The Whirlybird intimate and non-commercial. We want to continue maintaining The Whirlybird as an expression of our love for fun through folk art, music, dancing, cooking and eating, libations, hugging, laughter, and storytelling.

Once our talented musician and artist friends in Louisiana discovered The Whirlybird, they shared it with their friends and families, and after Hurricane Katrina, The Whirlybird became a local tool for recovery. It served as a form of cultural, emotional, and spiritual medicine, as fun can go a long way. One of our mottos was “Come get you some,” and we all have.

The Whirlybird became a place for cross-generational talent to be shared. It soon became a hub of activity, with parties and cooking, creative and collaborative projects among artists, dancing and live music, movie nights, stage plays, and storytelling. After the Cajun Americana band the Red Stick Ramblers shot their first music video there, fans around the world marveled at this honky-tonk rooted in another era. The Ramblers’ label, Sugar Hill Records of Nashville, called it “Opelousas, Louisiana’s premier underground nite spot.” Some years later, The Red Stick Ramblers had their Grammy send-off party at The Whirlybird. On another occasion, Christy told me Sam Broussard, 2008 Grammy Nominee for Best Zydeco or Cajun Music Album, said, “I believe we’re looking at the inside of Jim Phillips’ head.”

Since the beginning, Christy and I have worked hard to make The Whirlybird a unique and intimate cultural venue, rather than just another public social space focused on profit and mainstream pop culture. We have maintained a strong commitment to artistic expression and cultural traditions, and the music and fun have never stopped. In 2006, we moved full-time to Louisiana and, surprisingly, The Whirlybird building also moved, from our camp to our permanent residence.

There is a magical story behind this move. During the global financial crisis of 2007-2008, we were forced to sell our camp, including The Whirlybird building. However, thanks to a local friend and fan who is also a house mover, The Whirlybird returned to us. Our friend knew the building’s cultural value and history and wanted to help us continue the cultural phenomenon that is The Whirlybird, so he bought the building and moved it to our permanent residence, 10 miles away.

The Whirlybird has been a source of inspiration for many American and international artists, serving as a venue for music recordings, release parties, documentary films, and international television programs and music videos. It’s also a special place where people can have spiritual experiences through art, fall in love, celebrate weddings and anniversaries, enjoy crawfish boils, poetry readings, and attend concerts and dances. In addition to these events, The Whirlybird hosts private annual Thanksgiving potluck celebrations for friends and family, which sometimes include honky-tonk dances, jam sessions, and bonfires, as well as an annual Revelers’ Lundi Gras Blowout and a Pre-Blackpot Camp Throw Down open to all. They completed the first annual Blown Away on the Bayou Blue & Harmonica Summit. International visitors, brought by friends, also have the opportunity to experience unique American and Southwest Louisiana-style cultural traditions at The Whirlybird.

Southern Living Magazine praised The Whirlybird as a venue where “some of the biggest names in Cajun music and beyond ‘pass a good time'” and Country Roads Magazine referred to us as “educators” who “founded the Steampunk and Makers Fair in Lafayette” and have “the ability to guide people through cultural awakening.” Our aim has been to create a place where pure joy can be experienced through fostering cultural understanding and appreciation at The Whirlybird.

The Whirlybird is more than just Christy and Jim – it represents our artistic and cultural expression as artists. It’s a large piece of folk art that brings joy to many people, but it takes more than just vision to keep it running. It takes a lot of hard work and, unfortunately, money to maintain the 80-foot long building and grounds, pay for utilities, and more.

Since acquiring the building and property, our focus has been on supporting the artists who make The Whirlybird special. To sustain a vibrant calendar of events, we believe it’s important to raise funds to create an “artist fund” to back up admissions and provide a fair and generous award for collaborative artists. Our goal is to build a fund with enough financial power to supplement admissions and guarantee a minimum of $200 per artist for each event.

We are proud of this idea and we hope you will join us in building an artist fund. In the past, we did not charge admissions, but we eventually had to start accepting donations through tip jars. Now, it’s time to reach out to friends and supporters of The Whirlybird and find new patrons to help build an artist fund that can serve as a shining example for all art and culture lovers. Sign on below to contribute to the artists fund… 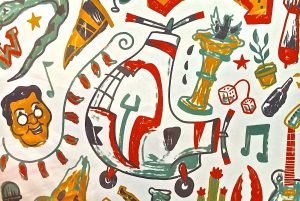 Please share the following link with anyone who may be interested in and able to contribute to the Whirlybird Artist Fund via email or text:

Donate here (or below) to support the Whirlybird Artist Fund and your favorite artists.

Thank you for your consideration and support.